8th March 2019
As we close in on the end of another week, our Kiwi dollar is working hard to keep its head above water amidst a relatively busy week in markets. As it stands, one NZD will buy you:
0.6639 US dollars
73.0169 Japanese yen
0.5836 euros
0.4995 Great British pound
0.8823 Canadian dollars
0.9397 Aussie Dollars
There are a few key elements influencing global markets, and evidently the NZD. We’ve tried our best to simplify them below.
Before we jump into what affected markets this week, we’ve compiled a quick summary of how the NZD performed in February 2019. Unfortunately, we closed out February weaker on the USD, GBP and CAD fronts. This was cushioned by an increase in the NZD’s value against the EUR, AUD and JPY. 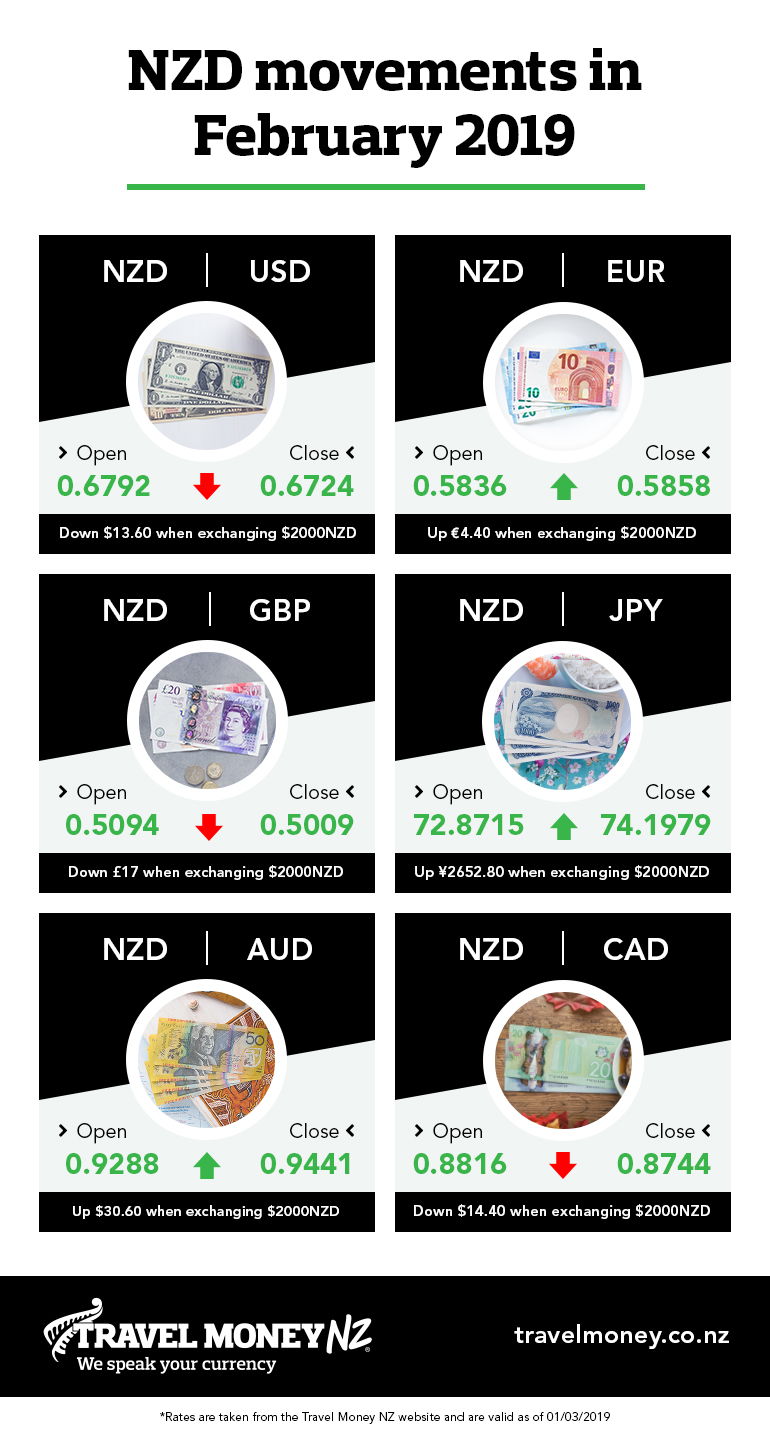 Don’t forget - if you really can’t be bothered keeping up with global markets but still need to know the best time to purchase your currency, we will happily do the hard work for you. Just sign up for rate alerts and we’ll shoot through an email when your currency reaches your preferred level.

Perhaps the biggest events adding downward pressure to the value of theNZD this week were the release of Australian Gross Domestic Product (GDP) and consumer spending, as well as a speech made by Reserve Bank of Australia (RBA) Governor Lowe.
On Tuesday GDP data was released that showed the Aussie economy expanded by 0.2% in Q4 2018. This followed the measly increase of 0.3% in Q3. Furthermore, this showed the GDP growth has slowed from 3.8% in H1 2018 to 0.9% in H2.
RBA Governor Lowe discussed these figures in his speech this week, also highlighting the fact that Australian employment growth had been strong, accelerating over the last four months. So, despite some less than ideal data, “the labour market suggests the economy is going pretty strongly”.
Following this announcement the AUD is trading at a two month low against the USD. This performance, and the corresponding pessimism put downward pressure on the value of the NZD as well.
The Canadian dollar has also followed suit, trading at two month lows on Wednesday as markets react to the possibility of Canadian interest rates remaining on hold.

European Central Bank to keep interest rates on hold until 2020

On Thursday the European Central Bank (ECB) confirmed market predictions by saying it would not raise interest rates in the eurozone before 2020.
Markets predicted this decision amidst an economic slowdown across Europe that has pushed Italy into a recession and slowed Germany economic growth to almost zero. As a result, the Euro fell slightly. Unfortunately, Kiwi’s were not able to see a whole lot of benefit out of this drop, as other external factors (like Aussie data) was enough to counterbalance any gains of the NZD against the EUR.

China is in the midst of it’s ‘Two Sessions’ meetings.

Today marks the end of the first week of China’s ‘two sessions’ meetings. It is China’s biggest annual series of political meetings held between The National People’s Congress and the Chinese People’s Political Consultative Conference. Over 3,000 delegates attend the meetings.
So far this week China has announced an annual economic growth target of 6 - 6.5%, alongside a 7.5% rise in military spending. Next week markets expect to see delegates endorse a law that aims to ease Chinese tensions with the US and Europe, as well as an announcement of tax cuts and greater support for entrepreneurs that generates much of China’s new jobs and wealth.
These meetings are happening alongside the continued trade talks between China and the US. President Trump. Trump has highlighted his optimism that a trade deal is close, however Chinese officials are not as affirming in their stance. Whilst both countries have agreed to broad outlines of an agreement that has seen tariffs in both countries roll back, some of the biggest elements are still yet to be confirmed. These are expected to be discussed further when Trump and Chinese President Xi Jinping meet in late March / early April.
Markets have seemingly ‘priced in’ (or accounted for) the positive progress of the trade war. Should things turn sour it would be another blow for the NZD due to our strong ties with China.

Only 20 sleeps until Brexit! As the UK and global citizens alike countdown the days until Brexit, British MPs still really don’t know what is happening with this whole ‘leaving the EU’ thing.
Despite sounding like a broken record, there really is nothing different to report from this time last week. Prime Minister May will face MPs next Tuesday (again) in the hope that they will vote in favour of her Brexit agreement. Should this deal get voted down, MPs will most likely vote on Wednesday to remove the possibility of leaving the EU with no deal. If this vote is successful MPs will then have another vote on Thursday on whether they should ask the EU for an extension.
Three votes in one week? Sheesh, the poor MPs might actually have to do their job and make a decision! Crazy, I know. Here’s hoping they can pull their fingers out and place their votes with Britain’s best intentions in mind. Either way, this time next week we should have a much better idea of the UK’s trajectory in regards to leaving the EU.
The value of the NZD against the pound has seen a steady decline since a peak on the 11th of December 2018, where one NZD would buy 0.5302GBP. Today’s rate of 0.4495 is significantly lower, and would see you taking £161.40 pound less if you exchanged $2000NZD now compared to December 11th. The pound’s renewed strength can most likely be attributed to the fact that leaving the EU with no deal is becoming less of a possibility. The Kiwi dollar has also been facing its own battles irrespective of Brexit, which has put further downward pressure on its value.
The uncertainty that lays ahead for the UK will no doubt have an effect on the value of the pound. If you are heading over there soon, we recommend checking out our article on how it may affect your travels. Don’t forget to add Rate Guard to your currency purchase in store either. It’s free, and if the exchange rate improves within 14 days of purchase we will refund you the difference*.

This blog is provided for information only and does not take into consideration your objectives, financial situation or needs.  You should consider whether the information and suggestions contained in any blog entry are appropriate for you, having regard to your own objectives, financial situation and needs.  While we take reasonable care in providing the blog, we give no warranties or representations that it is complete or accurate, or is appropriate for you.  We are not liable for any loss caused, whether due to negligence or otherwise, arising from use of, or reliance on, the information and/or suggestions contained in this blog.
All rates are quoted from the Travel Money NZ website, and are valid as of 8 March 2019
*Terms and conditions apply to Rate Guard. See http://www.travelmoney.co.nz/rate-guard for more information.